President Yoweri Museveni has commended Uganda Martyrs’ University for the emphasis on training students to become job creators and not job seekers.

The President made the remarks today at the institution’s Nkozi Campus in Mpigi District during the celebrations marking the 25th anniversary of the University. He said he was impressed by the University’s emphasis of attitude change in training students not to be job seekers but creators, which, he said, is lacking on the African continent.

“Education is about capacity building; being able to build capacity of entrepreneurship. Nkozi is imparting the right attitude,” he said. 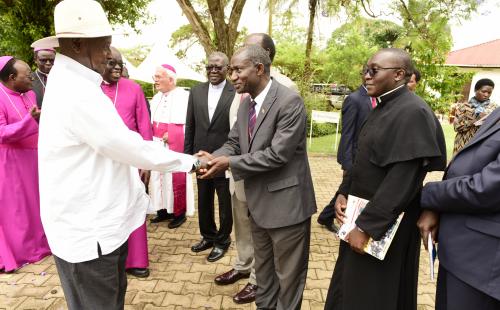 In relation to the establishment of the Uganda Martyrs’ University, President Museveni said that he has been lucky in life to be part of pioneering humble things, such as the 27 guns, that eventually became big projects. He revealed that Amin had decided to establish an Islamic University but when he was got rid of in 1979, Cabinet refused and said Uganda was not an Islamic country.

“Amin made Uganda join the Organization of Islamic Conference but Cabinet said Uganda was not an Islamic country and should not join OIC or build an Islamic University,” he said.

Mr. Museveni, however, said that when the National Resistance Movement came into power in 1986 and the issue of the Islamic University was brought up again, he said he was fine with establishing it as long as it admitted all qualifying Ugandans and had its syllabus approved by the National Council of Higher Education.

“I remember Mzee Sibo who led the delegation to request for the establishment of Uganda Martyrs’ University,” he said.

Nkozi was a Christian-founded National Teachers’ College and Mr. Adrian Sibo agreed that it should no longer be an NTC and supported the idea of a faith-based University.

“After the establishment of Nkozi, Mukono Christian University came,” the President said.

He further said the establishment of the universities reminded him of his book, ‘The Mustard Seed’.

“I am happy to be here and see how a small seed has become a big tree. The Banyankole say that if a hunter sets a trap, he must go back and see the animals that have been caught. I am happy to see what the trap has caught and that the ideas can become big materials,” he said.

The President Museveni said he would be interested in getting data about the graduates from Uganda Martyrs’ University that have created jobs.

He extended an apology to faith-based universities for being left out by government during the curriculum reform conference.

“We had a conference on curriculum but did not call the Vice-Chancellors of religious universities and only called those of public universities. Going forward, we shall ensure that in the next meeting, Vice-Chancellors of faith-based universities make an input. Both public and private universities have a vision of the education sector,” he said.
The Vice Chancellor of Uganda Martyr’s University, Mr. John Chrysostom Maviiri, said as the University moves into the next 25 years, it would put more emphasis on skilling students so that they do not seek jobs but have careers.

“If you have a career, you are more sought after,” he said.

Government tarmacked the 3-km road from Kayabwe Town along the Kampala – Masaka Highway to the University.

“On behalf of the Episcopal Conference, thank you for the support to Uganda Martyrs’ University,” the Archbishop said.

During the celebrations, the President launched the Uganda Martyrs’ University Silver Jubilee Book and commissioned the artistic impression of the University’s Silver Jubilee Complex to be constructed on Lubaga Hill in Kampala District.

Earlier President Museveni launched an application by Witness International and according to the application developer, James Mushabe, it can be used to help the youth get employment opportunities and help government ministries, agencies monitor and evaluate projects. The President said government would support the development of the application. ENDS